We recently uploaded our architectural pop-up cards “Buildings of the City Tel Aviv” as a crowdfunding project at Headstart website. 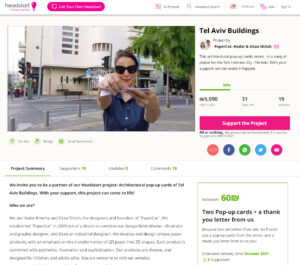 We are very excited about this project, as it is a real dream for us! A series of beloved buildings, which represent our beloved city. This is the city where we live and work as designers and residents.

Our project at Headstart is underway right now (July-August 2021).

You can go to our page – read, watch the video we made, and take a real part in the realization of the project by support.

Support is not free! It includes various options of packages that you can choose from. We invite everyone to visit our Headstart page here.

“Buildings of the City Tel Aviv” is a series of architectural pop-up cards that are all a song of praise for Tel Aviv city since then until today!

A pop-up card is for us a dawn to a magical world. There are so many greeting cards and postcards that are simple paper cards, but opening a pop-up card and discovering that it becomes a three-dimensional structure in front of your eyes – that’s magic! It always makes us open and close it again and again, like children (: trying to decipher the rise of the structure from flat to stable,  in all its glory. And for us, as designers- to design a pop-up card- that’s another wonderful field within the world of DIY projects in which we operate.

What Hasn’t been said about the architecture of Tel Aviv?!

Tourists who have visited it- return to visit it again and again! Because of the city, the places, the sea, the atmosphere, the people …

And there are also architecture tourists who come especially to experience and observe the impressive cluster of international style buildings (Bauhaus). We have so much sympathy for this city – the White City, which is also a UNESCO heritage site, for being old and renewed, cheeky and elegant in the same breath! A city that treasures magical stories of buildings and people. It is the buildings and people that make it what it is.

Tel Aviv is our natural environment as designers, as a family, as spouses, and as residents.

During the planning of the series, we thought of “typical” Tel Aviv buildings that represent for us the city of Tel Aviv with all the changes during the years, since it was established in 1909. It was very difficult to choose buildings for a series of 6 cards, but it was important to us that each building chosen represented something innovative in relation to the period in which it was created. It was also important to us that the buildings chosen be existing buildings that stand proudly today, and can be toured and visited. 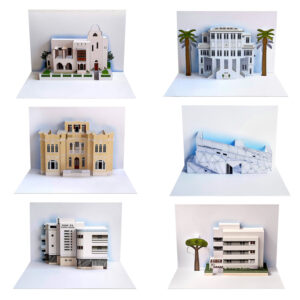 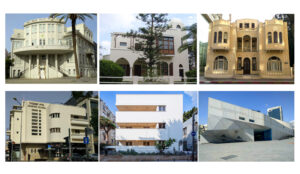 What will the series include?

The series will include 6 architectural pop-up postcards of important buildings in Tel Aviv. These are the buildings: Beit Ha’ir, Beit Bialik, Beit Litvinsky, Beit Liebling, Beit Yaakovzon and the Tel Aviv Museum – the new wing.

Each postcard that opens – opens a window to a magical world of historical and cultural architecture in the city of Tel Aviv.

The series celebrates the beautiful and special buildings of the city of Tel Aviv. Whether built in an eclectic style – typical of the early twentieth century, or built in an international style –  which is identified with the city in the twenties and thirties of the 20th century.

And there is also one special building built in the 21st century – this is the new wing of the Tel Aviv Museum, designed by the famous architect Prof. Preston Scott Cohen, which opened to the public in 2011. It is a unique and different structure in the urban landscape. It is unusual in this series because it is the newest, and was built as an addition to the familiar and old structure of the museum built in a brutalist style.

The pop-up cards were designed and planned with extreme care and fidelity to existing buildings. At the planning stage, it was not easy to overcome the constraints of the material (paper) or the formality of the cut. But at the end of the process, we came to as good and accurate a form as we could. 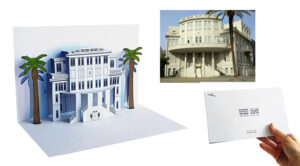 Our pop-up cards can be used as greeting cards. We are debating what is more gratifying – to receive a pop-up card with a greeting? or to give one to a close person …?

This pop-up cards collection is a wonderful gift for design & architecture lovers, fans of urban history, and of course for all the people who LOVE Tel Aviv!

Hot News! Since our crowd-funding project was a great success- the pop up cards series was produced! The series can be purchased here at our website, as singles or as a 6 cards series in a special price!