An Architectural Pop Up card – commissioned by The Rothschild Center

An Architectural Pop Up card – commissioned by The Rothschild Center

It was a pop-up card of the Rothschild Center in Tel Aviv!

About the Edmond de Rothschild Center

The center is a beautiful building located at 104 Rothschild Boulevard in Tel Aviv. It was founded by the Edmond de Rothschild Foundation. The foundation strives to support young artists and designers at the beginning of their careers. Their work are presented in rotating exhibitions. The center also offers training programs and personal accompaniment. These activities continue the Rothschild family’s long history of supporting the arts.

The special building of the Rothschild Center was designed by architect Yehuda Stampler in 1928. Its design was influenced by the style of the expressionist movement. This style was characterized by a modernist approach, that included the use of new materials and design innovation. In 2015 the building underwent strict renovation and preservation. it is a part of “The White City”, heritage sites announced by UNESCO organization.

About the design process of the pop-up card

As in previous projects we have done, the first step in our work process is research. In this case the research starts with photographing the structure from the outside and inside, in diverse angles. Of course, we also photographed the details that make the building unique, such as its unique tiles inside and at the entrance plaza. 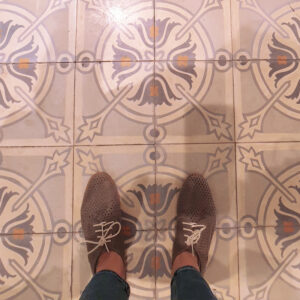 The second step was the configuration of the pop-up card.

At this point, we examine what is possible, in terms of material constraints (paper). Paper – as a material – has a certain limitation related to the direction of the fibers and the density of the material which does not allow any desired cutting or folding.

After examining all aspects – we determinate the final configuration of the pop-up card. 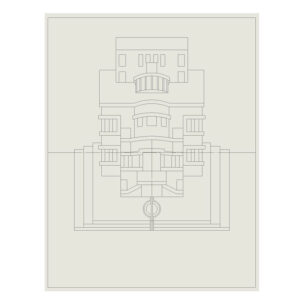 Soon after, we illustrated the details of the structure. We also designed graphics and the texts.

After that, we prepared a manual prototype white model of the card. We carefully examined the card, making sure everything “works” in terms of the movement and visibility.

Finally, the total design was ready, we transferred the files to print and die-cut.

Once files were transferred to the printing house, we accompanied the production closely and consistently.

As this is a commissioned project, we pay special attention to quality and details. The accompaniment included color approval at the printing house, and approval of the die-cut. The die-cut checking is really critical for the pop-up card. 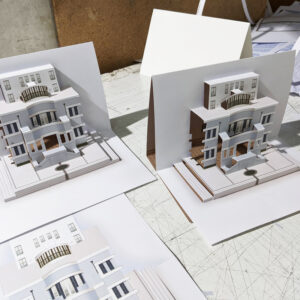 But the most fun was at the end of the process.

When we received compliments from our customers – the Rothschild Center. They were thrilled by the the design of the card!

Would you like to read more about other pop-up cards projects we designed?

Click here – and read about the collaboration we did with the “Anu” museum, and here too – and read about our series of pop-up cards “Building of the City Tel Aviv” that began as a mass recruitment project at Headstart.